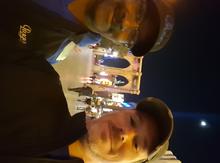 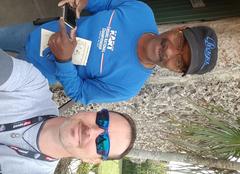 Trei met Cameron back in 1990 during a bowling league. Back in 1990. Cameron had raced SCCA and Formula Super Vee and learned that Trei was racing amatuer motocross and mini-sprints.

Cameron had just started working with INDUSKART out of Italy to start importing the DRAC Kart CIK sprint go-kart racing chassis. Cameron offered Trei the opportunity to try go-kart racing by providing a very old laydown kart chassis with a piston port engine and aluminum gas tanks. The whole time Trei could only see his feet and the sky, but the experience started a new common hobby and together Cameron and Trei raced club events at the MacArthur park kart track in Oklahoma City, OK. During this time Cameron gave Trei the opportunity to learn race flagging, tech duties and eventually officiating and event organizing. 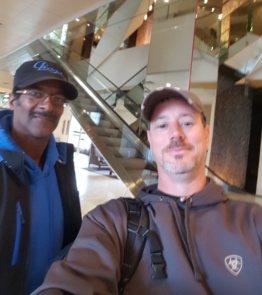 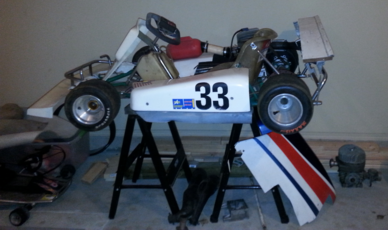 Today the TANDA RACING family and the motorsports world lost one of it's champions and pioneers.

Cameron Carter was a man with an infectious personality, he would talk to anyone at the track and he almost never knew a stranger. Kids and adults (who used to be kids) that grew up around him will remember he always wore different shirts and hats to add some fun to the race day.

Cameron had a great passion for the sport of racing, always taking time to talk to new people about his love for the sport and how karting was a great way for everyone to get out there and compete. He also worked for over 30 years to promote local karting in the community.

The Inspiration for TANDA RACING

Cameron convinced Trei and Angel to get back into go-kart racing after Trei and Cameron had a 15 year layoff from racing. So, they searched the internet for used go-karts as many others do and found two matched karts with matched KT100 engines. TANDA RACING was born.

It was Cameron's outreach to several chassis companies that eventually connected us with Petr' Pateck and Praga Global. Without the assistance and perseverance of Cameron TANDA RACING INC would have most likely just been a hobby. Through the vision of Cameron combined with direction from Trei and Angel the company has grown and been successful in giving opportunities to new and existing drivers.

The Dreamer, Father and the Friend

Cameron was more than a man who loved racing, he was a visionary, entrepreneur, dreamer and above all else he was a friend.

Cameron wanted to make the world a better place and loved adventure. Cameron loved space and anything related to space exploration or fantasy. As his friend I spent hundreds of hours watching Star Trek (every series), Battle Star Galactica (new and old) and Star Wars (everything) with him. We watched Leinoid meteor showers and viewed the cosmos through the lens of telescopes together.

When his son Alham was born the racing stopped for awhile, but our activities increased. Car shows with the Central Oklahoma MOPAR Association, bowling in leagues and Boy Scouts became things we did as a trio. Alham became interested in basketball and soon going to games to support him became the new "big thing".

No matter what we did and no matter how small the time was unforgettable. I got the opportunity to raise a son and be part of that life well before my own son Wyatt was born. There is not enough time or room to explain the connection I had with Cameron. The countless times he was there for me when everything went to crap and looked utterly hopeless.

Life will not be the same without Cameron, there's a void that just seems unfillable. I know Cameron is out there experiencing all there is and I hope in some way he has the ability to push everyone to try new things and experience everything they can.